When it comes to synchrotron light sources, brighter is better. By using bright beams in their accelerator, researchers at the Advanced Photon Source (APS) synchrotron facility can efficiently gather detailed data. In collaboration with APS engineers, Nicholas Goldring of RadiaSoft LLC creates and distributes simulation applications for designing vacuum chambers relevant to the APS. Below, find a video recording and summary of his keynote talk from the COMSOL Conference 2018 Boston.

RadiaSoft LLC models and designs particle accelerators and X-ray beamlines and is currently working with Argonne National Laboratory to improve vacuum chamber simulations. The goal of the APS upgrade is to improve the brightness of the X-ray beams, which, according to Goldring, is “a figure of merit for synchrotron light sources.” Increasing the beam intensity requires the bending magnet pole tips to be closer to the electron beam axis, which in turn requires smaller vacuum chambers. To fit the new design, the chambers must be scaled down from 190 mm to 22 mm, making the synchrotron’s behavior even more complex. As Goldring said: “Not only do we have a much brighter beam and higher-intensity X-rays, the vacuum chambers need to be smaller, resulting in complex and coupled physical phenomena, including high thermal stresses, photon stimulated desorption, and electromagnetic wakefields.” 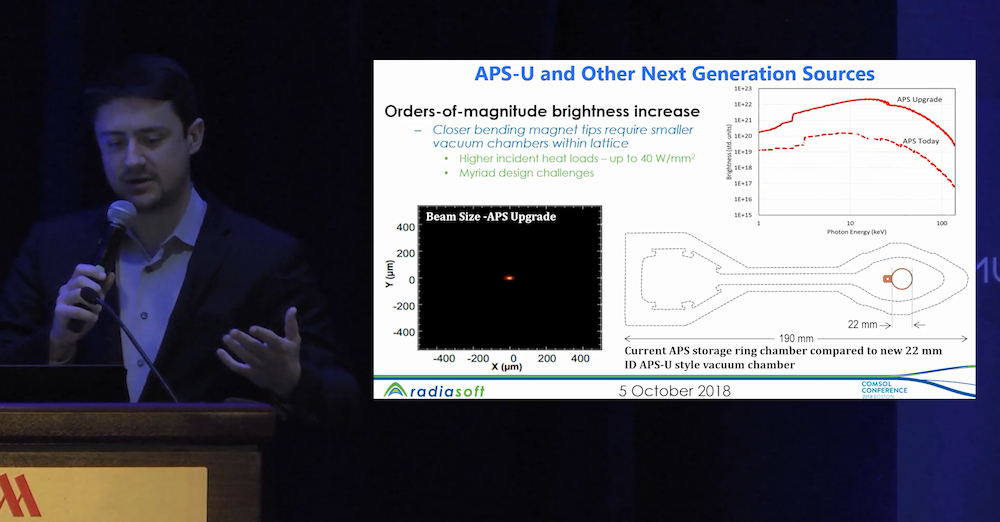 From the video: Nicholas Goldring discusses the beam brightness (top right) and vacuum chambers (bottom right) before and after the upgrade.

To accurately simulate the behavior of the APS synchrotron and other accelerators, RadiaSoft creates models, turns them into simulation applications, and then distributes them to project stakeholders.

The synchrotron vacuum chamber is a true multiphysics problem, but in a typical accelerator simulation, Goldring explained that “there are many different codes […] and they are very specialized” — usually to one physical process. This is problematic because going back and forth between simulations is error prone and time consuming.

As a solution to this issue, the engineers at RadiaSoft use the COMSOL Multiphysics® software for ray tracing, thermal analysis, molecular flow models, and more. After building a model, they turn it into a simulation application and distribute it using the COMSOL Server™ deployment product. This enables scientists and engineers who aren’t familiar with the codes or COMSOL Multiphysics to run their own simulations.

Goldring said that the Application Builder’s interface makes things simple, enabling him to “drag-and-drop lots of different model objects onto a canvas.” In addition, more sophistication can be added to an application via the built-in Java® development environment, such as by implementing custom algorithms. Further, Goldring said: “COMSOL® has an extensive [application program interface], but they make it easy to access by recording methods.” Colleagues can easily access the applications on RadiaSoft’s cloud-based servers via COMSOL Server™, which Goldring said “works out very nicely.”

Example: Rays in a Vacuum Chamber

The first application that Goldring discussed is for the rays in the new vacuum chamber design. App users can define a number of parameters, including the:

Based on these (and other) inputs, the application shows the temperature in the chamber as well as the energy and power distribution of the rays. Goldring said: “Synchrotron radiation power distribution is fairly complicated, especially as it progresses along the electron trajectory, so it’s often nice to plot what that distribution is like at various points.” 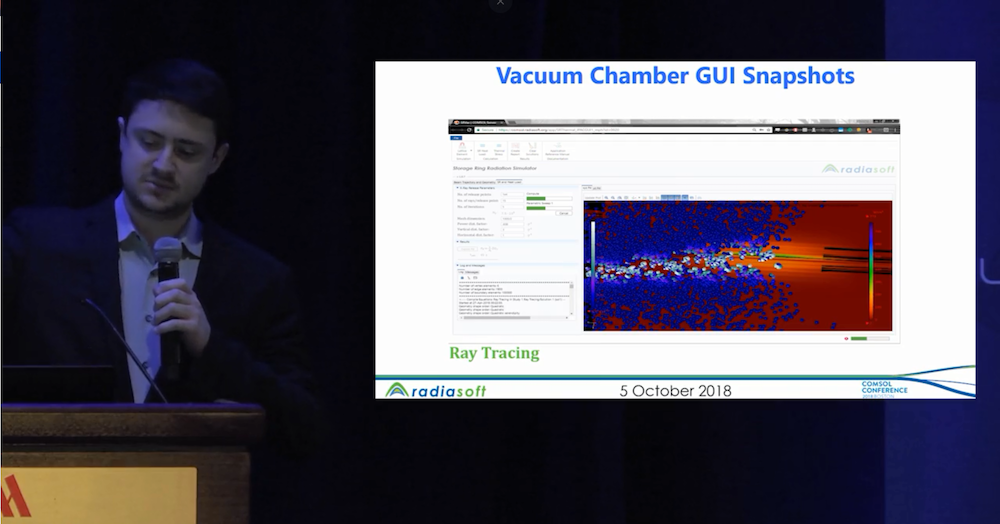 From the video: Nicholas Goldring showing the vacuum chamber application.

By deploying their simulation applications with COMSOL Server™, RadiaSoft is making it easier for scientists and engineers to test and optimize accelerator designs.

This material is based upon work supported by the U.S. Department of Energy, Office of Science, Office of Basic Energy Sciences, under Award Number DE-SC0015209.

To learn more about how RadiaSoft uses multiphysics modeling and applications to improve the APS synchrotron, watch the keynote video at the top of this post and visit the RadiaSoft website.

How to Refine and Adapt Imported Meshes