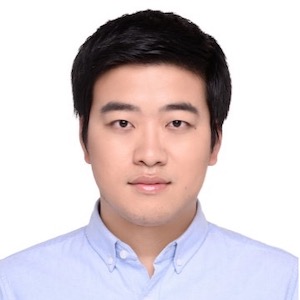 The dynamics of magnetization in magnets are described by micromagnetic theory, governed by the Landu–Lifshitz–Gilbert equations. We built a customized “Micromagnetics Module” using the Physics Builder in the COMSOL Multiphysics® software, which can be used to perform micromagnetic simulations within the framework of the COMSOL® software. This Micromagnetics Module can be coupled straightforwardly to other add-on modules to perform multiphysics micromagnetic simulations, such as magneto-dipolar coupling, magneto-elastic coupling, magnet-thermal coupling, and more. The module package, along with a user’s guide, is available for download.

Introduction to Magnonics and Micromagnetics

Magnonics is a subfield of spintronics or magnetism (Ref. 1). It is similar to its counterparts, phononics and photonics, but focuses on energy and information transport carried by spin waves (or magnons in the quantum limit), which are elementary excitations of magnetic systems. Spin waves can carry energy, linear and angular momentum, as well as information. Magnetic insulators such as YIG (Y3Fe5O12), because of its extremely small damping and absence of Joule heating (Ref. 2), are ideal materials for spin wave manipulation. Furthermore, spin waves can interact with magnetic textures (Ref. 3), such as magnetic domain walls, vortexes, and skyrmions — thereby offering a new route for operating magnetic memories. This makes magnonics a promising candidate for the next generation of information technology.

In this blog post, we will demonstrate how to use the Micromagnetics Module to perform numerical micromagnetic simulations of spin wave dynamics in COMSOL Multiphysics.

The dynamics of magnetic moments in magnetic materials is governed by the Landau–Lifshitz–Gilbert (LLG) equation. The spirit of micromagnetic modeling is to treat all magnetic moments in one or several unit cells as one semiclassical macrospin, which is denoted by a unit vector \textbf{m} defined as

where \textbf{M}(\textbf{r}, t) is the temporal-spatial distribution function of total magnetization and M_s is the saturation magnetization of the material.

The time evolution of this unit moment vector follows the LLG equation (Ref. 4)

where the dot indicates the time derivative, \gamma is the gyromagnetic ratio, \alpha is the Gilbert damping coefficient, and H_{\rm{eff}} is the effective field exerted on the local moment, which is defined as

with \mu_0 as the vacuum permeability and Ethe free energy of the magnetic system, including all possible interactions.

Let’s assume the simplest case: one macrospin in a static magnetic field applied along the z direction. The effective field is simply H_{\rm{eff}}=H \hat{e}_z. Starting from the initial state with the macrospin slightly tilted away from the equilibrium z direction, the macrospin vector then precesses around the effective field in a right-handed fashion according to the LLG equation. In the presence of Gilbert damping (the term with \alpha), the kinetic energy of the system is finally dissipated and the macrospin relaxes to its energy minimum, i.e., aligned with the effective field. Such precessing dynamics are related to ferromagnetic resonance (FMR), where the angular frequency depends linearly on the strength of the applied field.

Spin waves appear when introducing nonlocal interactions, e.g., short-ranged exchange interactions that take the following form in the continuum limit H_{\rm{eff}}=A \triangledown^2\textbf{m}, with A the exchange stiffness coefficient. In the presence of the exchange interaction, the precessing mode of a single macrospin can transport to neighboring macrospins, resulting in a propagating angular momentum current, e.g., spin waves.

Electromagnetic and elastic waves can be confined or steered via a nanostructure design, and so can spin waves. Furthermore, spin waves can be manipulated by magnetic textures, the inhomogeneous distribution of the magnetization order. One example is the magnetic domain wall, the transition region between two magnetic domains with opposite magnetization. It’s shown both theoretically and experimentally that the domain wall can serve as a conducting channel for spin waves, which can be used to design reconfigurable spin wave circuits.

The Micromagnetics Module Developed by the Physics Builder

There are two reasons we prefer to perform micromagnetic simulation using COMSOL Multiphysics instead: 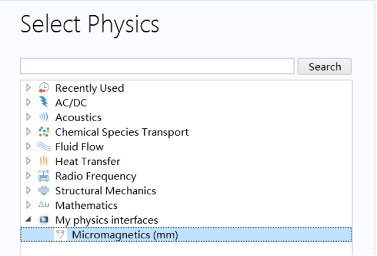 The Micromagnetics Module (V1.33) has the user interface shown below.

The Micromagnetics Module (V1.33) has almost all features presented by other open-source software, including but not limited to:

Based on the Micromagnetics Module, we have demonstrated many interesting spin wave physics and proposed various spin wave devices, such as the spin-wave diode (Ref. 5), spin-wave fiber (Ref. 6), spin-wave polarizer and retarder (Refs. 7–8), and magnetic logic gates (Ref. 9).

Multiphysics Couplings with the Micromagnetics Module

As mentioned above, one advantage of COMSOL Multiphysics is the capability for multiphysics couplings between the add-on modules. Spin waves can be manipulated by magnetic fields, lattice deformations, temperature gradients, etc. Coupled systems of spin waves and other excitations (such as electromagnetic and elastic waves) can combine the advantages of both worlds and produce rich physics, facilitating information generation and transmission. Now we will demonstrate what multiphysics couplings can be done based on the Micromagnetics Module.

Cavity magnonics (Ref. 10) is the interdiscipline of magnonics and cavity quantum electrodynamics (CQED). One of the applications of CQED is to realize quantum information processing by manipulating photon–matter interaction. A typical configuration in cavity magnonics is a microwave cavity with magnets placed inside. The magnets are coupled to the standing or propagating electromagnetic waves in the cavity. Such systems offer a new option to study the manipulation of spin current and nonlinear dynamics of magnetic moments (Refs. 11–12). The cavity magnonic system can be simulated by coupling the Micromagnetics Module and RF Module. For magnetostatic simulation, coupling between the Micromagnetics Module and AC/DC Module (magnetic fields) is sufficient.

Spin mechanics includes the interaction between magnetization and lattice deformation. In materials with magneto-elastic coupling (or magnetostriction), the spatial and temporal changes of magnetization (spin waves) exert forces on the lattice, and the deformed lattice (elastic waves) produces fields acting back onto the magnetization. For example, as the animation below shows, a magnetized disk is excited by magnetic fields, and the precessing magnetization radiates elastic waves to the substrate. The spin-mechanical problem can be simulated by coupling the Micromagnetics Module and Solid Mechanics Module.

In metallic magnets, spin-polarized electric currents exert spin-transfer torque to local magnetic moments, causing current-driven texture motion. Since the conductivity within magnetic film depends on the relative orientation of local magnetization and current direction due to the anisotropic magnetoresistance (AMR), the interplay between the current, torque, and texture can be modeled using the Micromagnetics Module with the AC/DC Module (electric currents).

As the animation below shows, the voltages applied on two electrodes modify the magnetic textures (top) via spin-transfer torque. Consequently, the local conductivity and the current density distribution (bottom) change accordingly. The magnetic textures finally adapt to a stable configuration, leading to an increasing conductance between two electrodes. It’s proposed that such a positive feedback behavior can be used for neuromorphic computing (Ref. 13).

We distribute the Micromagnetics Module file freely via:

The downloaded package includes the module installation file and a user’s guide with installation instructions and examples. We appreciate any suggestions, reports, and communication from users. More features will be updated actively in future versions.

Dr. Weichao Yu has a BS in applied physics from the School of Physical Science and Engineering, Tongji University, China, and a PhD in theoretical physics from Fudan University, China. He worked as a postdoctoral researcher at Fudan University and an assistant professor at the Institute for Materials Research, Tohoku University, Japan. He is currently a researcher at the Institute for Nanoelectronic Devices and Quantum Computing at Fudan University. Yu’s research interests include theoretical research on fundamental phenomena in spintronics and magnetism, including the dynamics of magnetic textures and spin waves and coupling between magnetic systems with other multiphysics systems, such as spin cavitronics or cavity spintronics (coupling between magnon and photon) and spin mechanics (coupling between spin waves and elastic waves). He proposes and designs new types of spintronic devices and new concepts for unconventional computing, such as logic-in-memory computing based on magnetic systems and neuromorphic computing with self-learning features. He has also developed a micromagnetic simulation module based on the finite element method with the capability of bidirectional coupling with other multiphysics systems, facilitating the study of fundamental magnetism and the design of new spintronic devices. 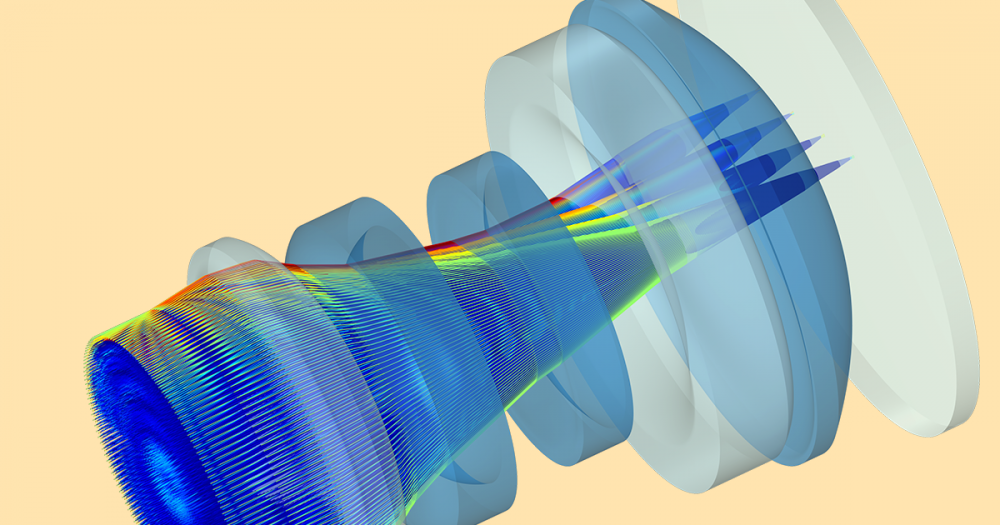 Zooming in on a Compact Camera Module Design with Simulation

Computational Electromagnetics Modeling: Which Module to Use?